My Birth Story: The Undiagnosed Breech

Today my beautiful baby boy is 5 weeks old! I can't believe it's going so quickly, he has grown so much already. Motherhood has so far been how I expected and totally not what I expected at the same time; but I'll save that for another blog!

Today I am sharing my birth story with you, it's taken 5 weeks to find the time to do this but here it is.

I had a textbook pregnancy; didn't suffer with morning sickness, felt great most of the time and loved being pregnant. So I suppose I was due a not so textbook labour.

Thursday 10 July 2014.
11:45pm
I woke up with what I thought was really bad trapped wind! I thought it was one of the signs my body was getting ready for labour to start in a few day's time.

Friday 11 July 2014.
12:15am
Paul arrived home from work to find me in the bathroom, asking him to help me! I wasn't sure if it was wind or labour, either way it hurt and not much was happening!

12:15 - 2:25am
Paul went to bed, if it was labour we assumed it would be a while so he'd better get some sleep after an 8 hour shift. I kept going from sitting on the loo, to trying to go back to bed, to walking around the bedroom, to leaning over the bed or bathroom sink! I didn't know what to do with myself.
In a few of my visits to the loo I had a bowl movement, again I just assumed it was one of the signs my body was getting ready for labour and why I was in so much pain.

2:25am
Finally something happened, I felt/heard a pop then there was a big gush of water, like a water balloon popping (luckily I was on the loo, again!). My waters had broken. This WAS labour.

2:30am
I started timing, what I now knew, were contractions. Paul was telling me to call the birth centre and let them know my waters had broken. With my natal hypnotherapy I didn't want to go too early. But I was uncomfortable and in pain.

The contractions were about 1 and half minutes apart, lasting 20-30 seconds. After timing for about 5 mins I called the birth centre. The midwife guided me through, deep breathing. I needed to go in to be checked over as my waters had broken.

3:00am
We grabbed the bags, in which I'd put the last minute bits on Thursday. Maybe I knew something was happening earlier in the day. I got dressed and off we went.

3:30am
We arrived at the birth centre. The midwife met us and took us into a birth room to check me over. My blood pressure was good, then the examination. That was easier said than done. Between contractions I somehow managed to lay on the couch; but still not long enough for a proper examination. I moved to a position leaning over the birth pool where I felt I needed to be sick; so yet another trip to the bathroom!

4:00am
I started using the gas and air so the midwife can do a proper examination. The baby was breech. An ambulance was called to take me to hospital. At this point I was leaning over the emptying birth pool :( with Paul holding my hand and helping me through my contractions and giving me water. All I could think was I don't want to go to hospital, I want the baby here, I don't want to be in an ambulance, I don't want to lay on a bed and I knew the baby was coming.

The midwife had a visual check (using a torch!). The midwife made the decision, I wouldn't be going to hospital, I wouldn't make it, the baby wanted to come and it would be more dangerous to have the baby in the ambulance than the birth centre. The midwives started to get prepared.

4:16am
Soon after came an overwhelming urge to push, the baby was on its way. The urge took over the feeling of pain and was primal. More midwives came in to help. The baby's heartbeat needed to be checked…Nothing. A heart stopping moment for Paul and I. But then we heard it, baby was just in a position that made it hard to find, it was normal.

Time to start pushing. I did the initial pushing still in a standing position, not wanting to lay down, knowing it would make my pelvis smaller and pushing harder. Initially I was grunting through the contractions but was told by the midwife to use that energy for a bigger push. It was working, the baby was nearly here. For breech delivery laying down is the best position to be in. This was all explained to me; even though I didn't want to be laying down I knew it was best for me and the baby. So I moved to the couch with my bum on the edge ready for delivery.

A few pushes later and the bottom was out, a couple more then the legs and torso. I was nearly there, ready to meet our baby, I was still using the gas and air and had Paul holding my hand encouraging me the whole time. The contractions subsided a little with the head still not delivered so I had to have a small episiotomy. The baby was here. But no crying, Paul went to the midwives to check all was ok…Then there was the cry.

It wasn't quite the labour and delivery I was expecting, no time to use natal hypnotherapy, but I have no doubt that helped me stay calm, focused and take the fact Harry was breech in my stride. I listened to my body. Undiagnosed breeches are rare, it's even rarer to have a midwife delivery, but as a team we did it and I wouldn't change it. The midwives were amazing; for most it was their first breech delivery! After 5 hours of labour our beautiful baby boy was here. Now to start the next chapter. 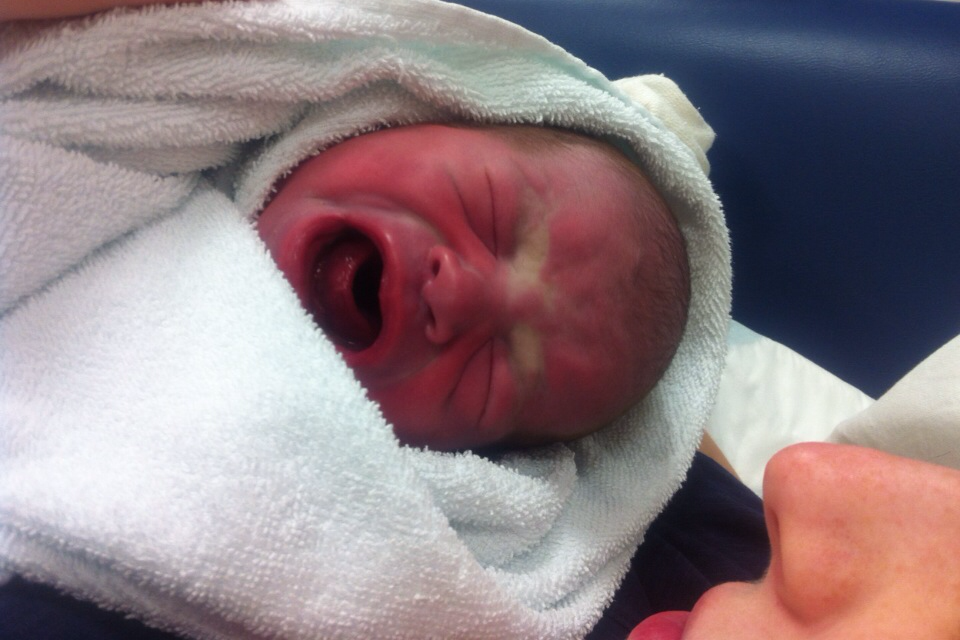 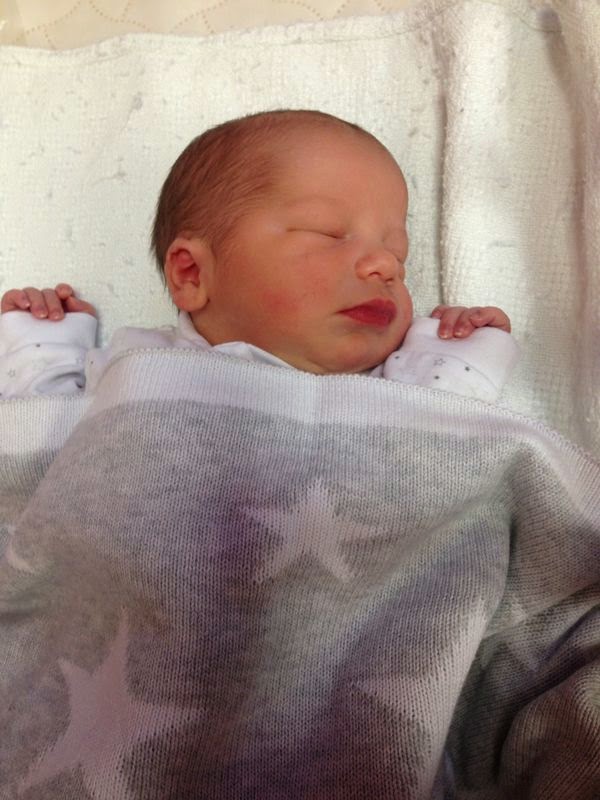 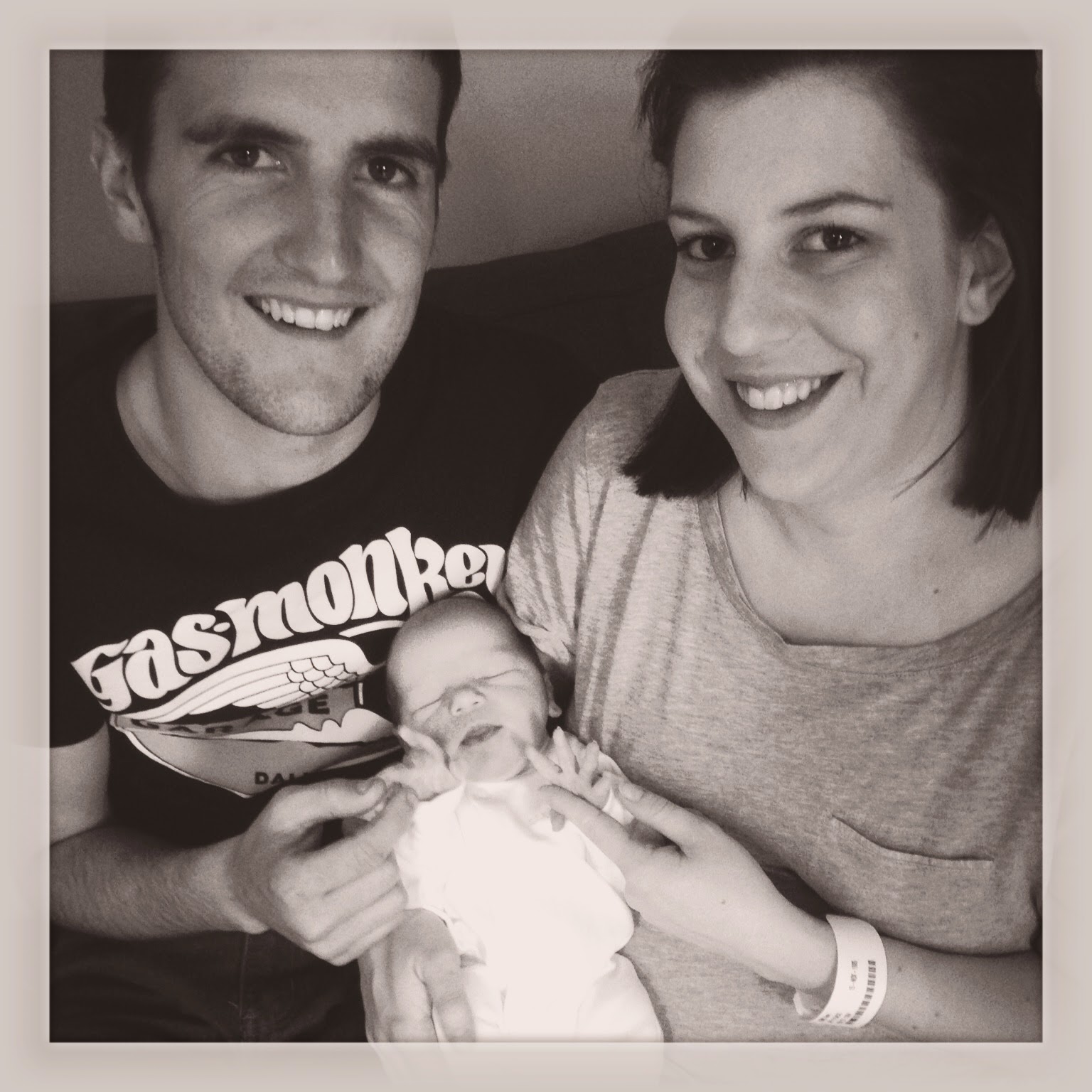 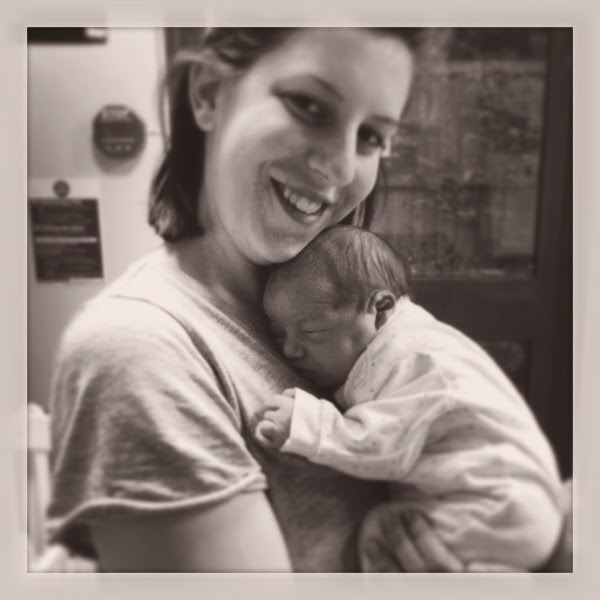